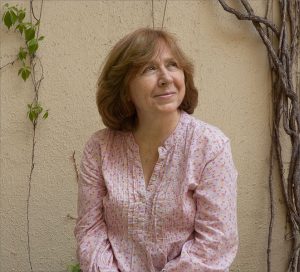 Svetlana Alexievich won the Nobel Prize in Literature „for her polyphonic writings, a monument to suffering and courage in our time“, the Swedish Academy announced October, 8., 2015

„I’m very happy. And overwhelmed by a storm of complex feelings. Joy, of course. But alarm as well. The great shadows of Ivan Bunin, Boris Pasternak, and Alexander Solzhenitsyn have come alive. The greater part of my path has been traveled, but much work remains ahead of me, and many new turns. Now I cannot let myself slide.“

Svetlana Alexievich was born in Ivano-Frankovsk, Ukraine. At present, this writer of international renown, a dedicated critic of the dictatorial regime of her country, is living in Minsk, Belarus. Her books have been translated into 52 languages and published in 55 countries so far. They have formed the basis for a dozen plays, and more than twenty of her scripts have been filmed as documentaries. She is the recipient of numerous awards, including the Nobel Prize in Literature 2015, the Prix Médicis Essai 2013 and the Best Book of the Year Prize 2013 by the French literary magazine Lire for „Time Second Hand“, the Peace Prize by the German Publishers and Booksellers Association 2013, the Angelus Central European Literature Award 2011 in Wroclaw/Poland for her book „War’s Unwomanly Face“, the Ryszard Kapu?ci?ski Award for literary reportage 2011 for „War’s Unwomanly Face“, the National Book Critics Circle Award, New York 2006 for „The Chernobyl Prayer“; Erich Maria Remarque Peace Prize, OsnabrÃ¼ck, 2001; the Robert Geisendörfer Radio Play Prize, the German Academy of the Performing Arts, Berlin, 2000; the “Témoin du Monde,” Paris, 1999; „The Best Book on Politics of the Year,“ Friedrich Ebert Foundation, Bremen, 1998; the Andrej Sinjavskij Prize, Moscow, 1997; the Kurt Tucholsky Prize, Swedish PEN Club, Stockholm, 1996.

Svetlana Alexievich has created a literary non-fiction genre that is entirely her own. She writes „novels of voices.“ She has developed this genre book after book, constantly honing the esthetic of her documentary prose, which is based on hundreds of interviews. Her skill at this allows her to intertwine the original voices of her subjects into an artful condensation of a panorama of souls.

„I see the world as voices, as colors, as it were. From book to book, I change, the subjects change, but the narrative thread remains the same. It is the narrative thread of the people I have come to know. … With thousands of voices I can create – you could hardly call it reality, since reality remains unfathomable – an image of my time, of my country. … It all forms a sort of small encyclopedia, the encyclopedia of my generation, of the people I came to meet. How did they live? What did they believe in? How did they die and how did they kill? And how hard did they pursue happiness, and did they fail to catch it?“

Alexievich’s five great prose volumes represent an impressing history of mentality – not only of the Soviet Union. Each subsequent book poses still more radically the question, no longer merely about the meaning and meaninglessness of political ideologies, but truly the question for man’s makings.

The Chernobyl Prayer: A Chronicle of the Future (Voices From Chernobyl)