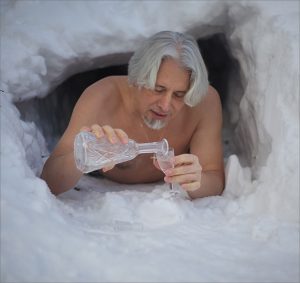 Vladimir Sorokin, one of Russia’s most important contemporary writers, was born in 1955 in Bykovo near Moscow. Following his studies in Engineering at the Gubkin Institute of Oil and Gas. During the 1980s he belonged to the „Moscow Underground“ of artists and writers, and was published in „Samizdat“. His first novel, „Ochered“ (Engl. „The Queue“, 1988), was published in Paris 1985 by the Russian immigrant publisher Syntaxis. Than the novel was translated into 10 languages. He only became known to a wider audience in Russia after Perestroika. Sorokin is one of the leading representatives of the post-modern school of Russian literature. In his books he plays with different genres and styles, parodies the pathos of Socialist Realism, appropriates fragments from folk tales and formula fiction, and combines elements of political satire, Soviet and Russian legends with depictions of violence and utopian visions. It was above all Sorokin’s parodistic deconstructions of Russian and Soviet classics, and his use of pornographic elements, which led the Russian youth organisation „Moving Together“ to organise public protests against him.

Vladimir Sorokin is the author of thirteen novels („Manaraga“, „Telluria“, „The Blizzard“, „The Day of an Oprichnik“, „Ice Trilogy“ and others), eight screenplays and ten plays. His books have been translated into more than 30 languages. In 2001 Sorokin was awarded the Andrej Bely Prize for outstanding contributions to Russian literature. In 2003, he wrote a libretto for an opera „Rosenthal’s children“ for the Bolshoi Theatre in Moscow. In 2010 Vladimir Sorokin has been awarded the Russian-Italian Gorky Prize and in 2011 the Prize „NOS“ (New Literature Innovations) and the „˜Bolshaya Kniga“ Literary Prize for his novel „The Blizzard“. He lives in Berlin and Moscow.