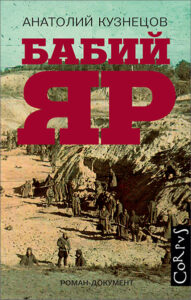 Anatoly Kuznetsov published his documentary novel in the journal “Yunost” in 1966, but in severely censored form, with more than half of the text missing. The writer’s apartment was searched several times for the original version of the manuscript, which Kuznetsov had fortunately sealed in jars and hidden in the forest. In 1969, while the author was in London on an official visit, he received political refuge, and through friends he managed to bring photostats of the manuscript into the country. By that time his books had been prohibited in the USSR. In 1970, the complete version of “Babi Yar” was published by Posev publishing house.