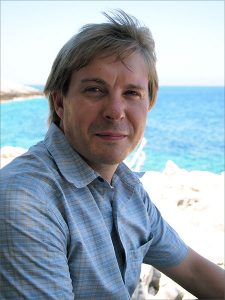 Sergei Lebedev was born in Moscow in 1981. For seven years he worked on geological expeditions in north Russia and Central Asia. He has been published as a poet, essayist and journalist. His novel „Der Himmel auf ihren Schultern“ („Buried in Oblivion“) has been selected as „Book of the Month June 2013“ (awarded by the Darmstädter Jury). Currently he lives in Potsdam/Germany.

„Lebedev is arguably the best of Russia’s younger generation of writers.“ (The New York Review of Books)

„Turn off your television sets and get reading. Sergei Lebedev writes not of the past, but of today. He writes of how we haven’t yet digested or understood the Stalin era. Perestroika already feels like the olden days, while Stalin is alive and kicking. Back in the nineties we were all dreamers; we thought freedom had come. But people who have spent their whole life in a prison camp cannot just walk through the gates and become free in a day. Instead of perestroika and freedom, we’ve had our country plundered, Russians are at war with Ukrainians, we’re erecting new monuments to Stalin. People pray in the churches for Russia to become great again. And this isn’t the Stalin generation, but their children. And their children’s children. There is a vast and dark connection. Lebedev’s protagonists are searching for a path, a way to rip that umbilical cord.“