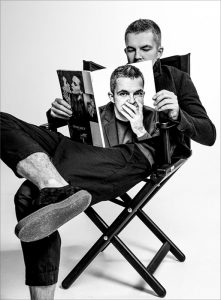 Sasha Filipenko was born in Minsk in 1984. He graduated from the Department of Philology at the Petersburg University and from Bard College, New York, subsequently working as a journalist, including for the Dozhd independent TV station, developing television programs and authoring four novels. Filipenko is a laureate of the Russkaya Premia (Russian Award) and a finalist of the Bolshaya Kniga (Big Book) competition.

This young and talented writer and journalist has already published six novels, all of which take historical or current social events as their starting point and are based on archival documents and the author’s own research. Filipenko’s Russian publisher, Boris Pasternak, has said of his work, „Literature is sometimes more topical than contemporary journalism.“ Svetlana Alexievich, winner of the Nobel Prize for Literature, has written, „Saha Filipenko is one of the young authors who immediately became serious writers. If you want to know what modern, young Russia thinks, read Filipenko.“

Filipenko is not allowed to publish in Belarus. He has published several articles and open letters about the situation in Belarus in Svenska Dagbladet, Süddeutsche Zeitung, Frankfurter Allgemeine and Neue Zürcher Zeitung. Since, significantly due to his Open Letters to René Fasel, the President of the International Ice Hockey Federation, Belarus was deprived of the Ice Hockey World Championship in the summer of 2021. President Lukashenko considers Filipenko his personal enemy; he faces more than twenty years in prison. Filipenko now lives in exile.